Levante Ferries is one of the handful of expansive, upcoming ferry operators really shaking up the Greek Coastal scene.

One key feature of Levante Ferries is their ability to carry out remarkable transformations on acquired tonnage.

The FIOR DI LEVANTE won a Shippax Award in 2015 for “The integrity and creativity of the total design, both inside and outside, including the company branding”. However, perhaps their latest refurbishment is their most remarkable yet, literally bringing a ferry back from the grave.

The most recent addition to the fleet is SMYRNA. Appropriately, Smyrna is the Ancient Greek name for the city of Izmir in Turkey and it is that city which Levante Ferries plans to use the ship to link to Thessaloniki in Greece.

Dating from 1977, the vessel is currently undergoing significant rebuilding and refurbishment at the Drapetsona Repair Dock, South West Athens.

Thanks to Levante Ferries, we share some artist impressions of how she will look when work is complete.

A Ferry That Covered Most Of The Baltic

The table below gives a snapshot of the vessel’s history.

A Sale Then Re-Sale

The ship completed service in early 2019 for Unity Line of Poland as the KOPERNIK, after she was replaced in the fleet by the COPERNICUS (ex PUGLIA) of Tirrenia. In April of the same year, she was sold to Mediterranean Ships Breaking.

The vessel sailed from Poland on 17 March 2019, arriving in Piraeus on 4 April. Renamed PERN, it was said that she would be prepared in the Piraeus region for scrapping in Turkey.

Very soon after the ship’s arrival in Greece, there were rumours of the vessel being re-sold for further service. Speculation quickly became a reality. The Levante Ferries flag was raised aboard the vessel after a short ceremony on 27 June 2019, marking the change in ownership. The ship was renamed SMYRNA on 11 July 2019.

It was revealed that Levante planned to refurbish the ship for a new Thessaloniki – Izmir route. With a previous capacity for only 360 passengers and a dated interior, a major re-build was embarked upon to increase capacity and create an impressive customer experience.

The ship’s accommodation was completely gutted over the following months of 2019 with some exterior changes visible too.

With Global passenger travel very disrupted by the Covid-pandemic there has been no pressure to complete the refit in a hurry. However, these artist impressions suggest that the vessel will offer one of the most remarkable ferry transformations ever.

NIFS looks forward to bringing you a full profile of this young and dynamic ferry company in the near future. 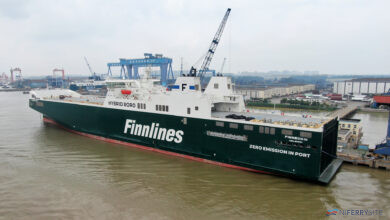 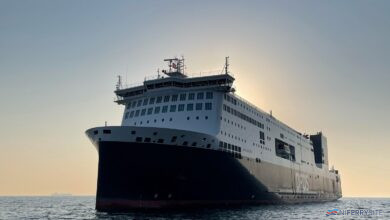