This weeks ‘Blast from the Past’ was kindly donated by Pauline and Dave Emerson from the collection of Pauline’s late father; Peter Fletcher.  It is a menu from the ‘Copelands Restaurant’ on the Belfast – Liverpool ferry ST COLUM I.

ST COLUM I herself was of course originally Irish Continental Line’s (now Irish Ferries) ST PATRICK of 1972.  The Belfast Ferries service was of course later replaced by a new service operated by Norse Irish Ferries, which after several takeovers is now operated by Stena Line using the STENA LAGAN and STENA MERSEY.

For comparison here is a link to the current Stena Line “Met Bar and Grill” menu (pdf file).  What a difference almost 30 years makes! 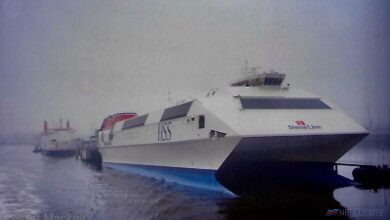