Update 27.01.2021: Yohann Nédélec, the Deputy Mayor of Brest and Vice-President of Brest Métropole, has revealed on Twitter that the new Brittany Ferries routes will be Saint-Malo to Rosslare and Roscoff to Rosslare.

In a surprising development, plans emerged on Monday evening (25 January) for a further expansion of Brittany Ferries services between France and Ireland.

Loïg Chesnais-Girard, Président of the Brittany region, Tweeted that BF would imminently return a ferry to Roscoff and Saint-Malo.

A subsequent press release from the Brittany region referred to protecting the Brittany region’s economy from the effects of Brexit, referring to the impact on the fishing and haulage industries. It was added that ‘Brexit adjustment support’ funding would be sought. This very much implied an Irish dimension.

The situation was given some clarity in a pair of Tweets from Jean-Marc Roué, Brittany Ferries Président. He stated that in order to serve Brittany farmers and industry, from early February ARMORIQUE will serve Ireland from Roscoff and Saint-Malo.

Details of the routes are expected very soon, including whether the Irish port will be Cork or Rosslare, or even both.

ARMORIQUE is due to start operating a new seasonal weekly Roscoff – Cork trip in the Spring. From 23 March she is due to sail Tuesday evenings from Roscoff and back Wednesday afternoons from Cork. This will complement the PONT-AVEN’s existing roundtrip on the same route that departs France late on a Friday evening and back from Ireland on Saturday afternoons. Roscoff – Cork normally operates March to October.

With the Normandy region’s port of Cherbourg expecting boom times with increased capacity from Brittany Ferries to Rosslare, Stena Line to Rosslare and Dublin and Irish Ferries to Dublin, there seems little doubt that the Brittany region wanted a share of this traffic.

Additionally, it is understood that there is a significant movement of fish between Ireland and Brittany that has been affected by the Brexit/Covid difficulties on the Ireland – Great Britain – France landbridge.

Further details on NIFS when we get them. 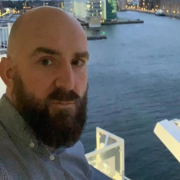