In order to release W.B. YEATS to have a new upper bow door to be fitted, Irish Ferries has moved BLUE STAR 1 north to take over the Dublin – Cherbourg route.  As a result, the company has temporarily suspended its Rosslare – Pembroke Dock route.

Pembroke passengers and freight are being accommodated on Stena Line’s competing Rosslare – Fishguard route where possible.  Irish Ferries is presently expected to resume Pembroke Dock services on 7 May.

W.B. YEATS arrived in Belfast this evening (2 May).  The ship is currently moored at Harland & Wolff’s Ship Repair Quay and is not expected to dry dock on this occasion.

Tomorrow, Tuesday 3 May will be the first time that BLUE STAR 1 has made a commercial crossing to France.  Her deployment on the Cherbourg route is likely due to high passenger demand as a result of the time of year and continued absence of Stena Line’s STENA HORIZON on its Rosslare – Cherbourg route (see below).

Traditionally, the smaller passenger capacity EPSILON has covered any absence of W.B. YEATS.  Instead, EPSILON remains on the Dublin – Holyhead route with ULYSSES and the fast-craft DUBLIN SWIFT.

Stena Horizon Remains Out of Service

Stena Line’s STENA HORIZON remains in Belfast, having arrived there on 29 March.  As a result, passenger services are currently suspended on Stena’s Rosslare – Cherbourg route and a very limited amount of accompanied freight is being carried.

The chartered ro-ro freighter SEATRUCK PANORAMA was the only vessel on the route from 11 April until 30 April when she was joined by STENA FORECASTER.  The latter is also a ro-ro vessel and takes STENA HORIZON’s place on the roster.

Previously STENA FORECASTER covered sister-ship STENA FORETELLER on Stena Line’s Belfast – Liverpool route 19 – 29 April.  Prior to this she was in dry dock in Belfast after concluding a charter to P&O Ferries at the start of April.

Originally STENA HORIZON had been expected to return to the Rosslare – Cherbourg service on 12 April.  STENA ESTRID had been redeployed to the route to cover Horizon’s original overhaul period, but was required back at Dublin for the Easter rush in place of the smaller relief vessel STENA NORDICA.

STENA HORIZON left Belfast Dry Dock on 29 April, but this was only to free up space for the incoming QUEEN VICTORIA.  STENA HORIZON entered Belfast Building Dock yesterday, 2 May and is currently expected to remain there until the afternoon of 7 May.  She is currently showing as operating to Cherbourg that evening so it is possible that she may depart Belfast earlier or have a revised departure time to France.

Stena Nordica Returns to The Baltic

With P&O Ferries having returned to a two-ship service at Cairnryan, STENA NORDICA completed her final sailing as third ship on the Belfast – Cairnryan route on 25 April.  She left Cairnryan that afternoon bound for Karlskrona ahead of resuming her normal Karlskrona – Gdynia route.

STENA NORDICA had moved to Belfast in response to a lack of capacity resulting from P&O Ferries suspending services, but with the Larne to Cairnyran route back to full strength ‘Nordica was no longer required.

Ironically, the EUROPEAN CAUSEWAY’s technical problems on the afternoon of 26 April saw her out of service until the morning of 28 April.  This once again put severe pressure on existing crossings. 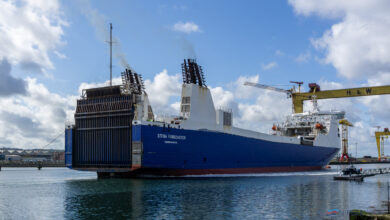