STENA SCOTIA returned to the Irish Sea last week, initially to release her sister-ship STENA HIBERNIA for dry docking, before replacing STENA PERFORMER on the Belfast to Heysham run so she can return to owner Seatruck Ferries after her own dry docking.  In these pictures by regular contributor Scott Mackey we get a rare glimpse inside a vessel which normally only gets seen by freight drivers and her own crew. STENA SCOTIA and her slightly younger sister STENA HIBERNIA were delivered in 1996 to Norfolk Line by Japan’s Miho Zosen of Shimizu, Japan. With thanks to Scott Mackey and the crew of STENA SCOTIA.

All photographs are Copyright © Scott Mackey unless otherwise explicitly stated. 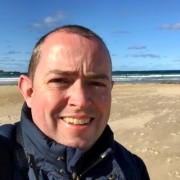 Scott Mackey is a Transportation and Transport Research graduate from Ulster University at Jordanstown. He has significant experience in the ferry industry, having worked for Stena Line in onboard services, as a customer services agent and sales support administrator in the freight department. He also has significant experience in public and community transport, having worked for Translink and as project officer of a rural community transport partnership. Scott has written numerous features for shipping and transport magazines and books.
Check Also
Close
Facebook Twitter LinkedIn WhatsApp Telegram Viber
Back to top button
Close
NI Ferry Site
Close
Log In