The E-flexer class ship was also expected to visit the Port of Cork, however, this was later cancelled.  This is understood to be due to berth availability at the port.  The port plays host to Brittany Ferries’ seasonal service to Roscoff, operated by the PONT-AVEN and ARMORIQUE.

As previously revealed, the SALAMANCA was at Brest for the One Ocean Summit which took place 9 – 11 February.  She arrived at the port on 6 February.  The ferry played quite the starring role at the event. This included hosting the French Président Emmanuel Macron and Irish Taoiseach (Prime Minister) Micheál Martin.

Rosslare trials then preparing for service

Having departed Brest early on the afternoon of Saturday 12 February, SALAMANCA arrived at Rosslare, Wexford, just before 0800 the following morning.

During the following almost five and a half hours, the vessel carried out a range of trials.  She firstly berthed bow on Berth 2, followed by stern on at the same ramp.  She later repeated the same pattern on Berth 1.

Around 1330 on 13 February, SALAMANCA departed Rosslare for Santander.  She arrived at the Spanish port early on the morning of 15 February.  The vessel is due to have a pre-service and re-flagging related dry-dock at the local Astander yard 18 February to 7 March.

Cherbourg will be the next port of call for SALAMANCA.  At the Normandy port she will undergo final preparations and storing before she arrives in Portsmouth on 25 March.  Her first commercial sailing will be to Bilbao, Spain at 2130 on 27 March.

The berthing trials have prompted considerable speculation about Brittany Ferries plans for the E-Flexer class after the third vessel destined for the company is delivered next year.  A recent press release from Brittany Ferries revealed that SANTOÑA, due in service in the early part of 2023, will operate the Portsmouth – Santander route.  With the SALAMANCA operating the Portsmouth – Bilbao service, this leaves questions about how Brittany Ferries will use the GALICIA.

Logically, it would seem that the most logical possibilities are the Santander – Plymouth – Roscoff – Cork services currently maintained by the PONT-AVEN or the Bilbao – Rosslare – Cherbourg route of the chartered CONNEMARA.  However, until there is any news from Brittany Ferries, any option can’t be ruled out.

Even though Brittany Ferries has not indicated any final decision, it is fair to say that the berthing trials at Rosslare are at least for sensible operational resilience reasons.  Even if an E-Flexer isn’t permanently allocated to the Irish routes, it seems very possible that one of the class could operate occasionally on Irish services to cover refit periods etc.

Not a first for Rosslare 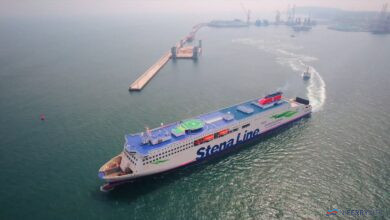