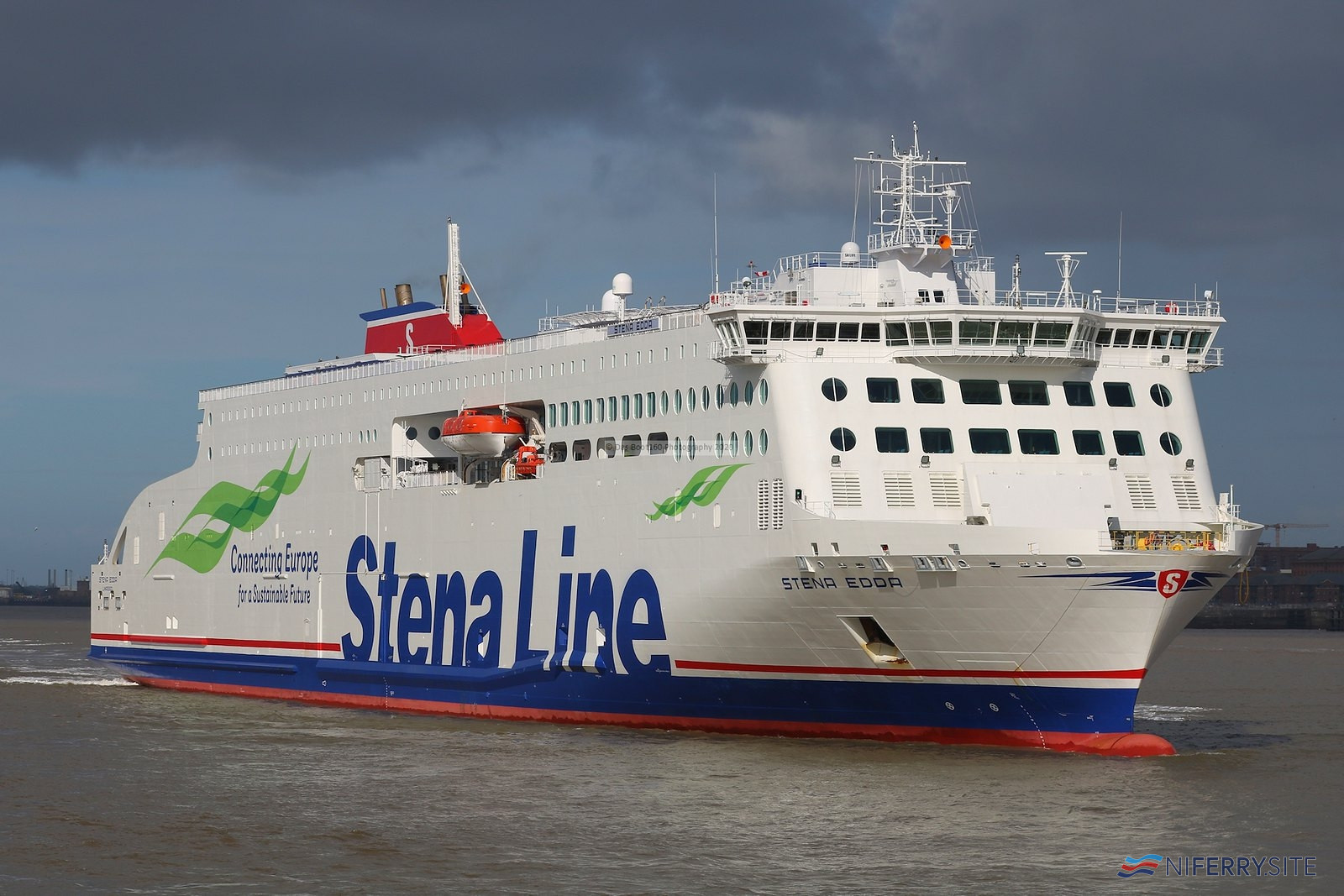 Stena Edda is the first of two brand-new ferries being introduced on the Belfast to Liverpool (Birkenhead) route by Stena Line in 2020 and 2021. She is second of five new “next-generation” E-Flexer class ferries ordered by Stena RoRo for service with sister-company Stena Line, and is a direct-sister to the first in the series, STENA ESTRID.

STENA EDDA was delivered to Stena at Weihai on January 15, 2020 – exactly two months to the day after her sister was delivered. She left Weihai under the command of Senior Master Captain Neil Whittaker for the first leg of her delivery voyage on January 22. Captain Whittaker was also part of the Stena Line site team at Weihai overseeing the construction of STENA ESTRID and STENA EDDA. Because of the length of the journey, like STENA ESTRID, STENA EDDA made several stops on the way. The first of these was at Singapore, where the vessel took on sufficient bunkers to get to Europe. After a stop at Algeciras she set course for the Belfast.

Following arrival in Belfast Lough on 25.02.20, Stena Edda stayed at Anchor off Groomsport until the following morning. Prior to sunrise she made her way to Belfast Victoria Terminal 2 for berthing trials, becoming the first ferry to berth at the rebuilt berth. On the 28.02.20, STENA EDDA completed berthing trials at Belfast VT4, Loch Ryan Port, and 12 Quays South at Birkenhead. She remained at Birkenhead, apart from some trips up river as part of her commissioning, until she entered commercial service. During this period final adjustments were made to the passenger accommodation by both contractors and crew. Crew training and all required drills were also completed

STENA EDDA‘s maiden commercial voyage took place under the command of Caption Krzysztof (Kris) Gadomski with the overnight voyage from Birkenhead to Belfast on 09.03.20. This was just two weeks ahead of the announcement of the UK’s COVID-19 coronavirus lockdown on March 23.

The brand-new ferry replaced STENA LAGAN which served the Belfast – Liverpool route since being delivered new to Norse Merchant Ferries in 2005.  The route and its ships were subsequently taken over by Norfolk Line and DFDS before passing into Stena Line ownership in 2010/11.  Initially, STENA EDDA will sail opposite STENA MERSEY until the latter goes for rebuilding Turkey.  In 2021 near-sister STENA EMBLA will join STENA EDDA on the Belfast – Liverpool (Birkenhead) service.  Both STENA LAGAN and STENA MERSEY are to be rebuilt for service elsewhere. STENA LAGAN left for her rebuild shortly after she was replaced by ‘Edda‘.

At 214.5m in length, STENA EDDA is the joint longest passenger ferry (with STENA ESTRID) in operation on Irish Sea services. She is also currently the longest ferry to ever serve Northern Ireland and the largest ferry by gross tonnage (41,671 gt) to ever enter scheduled service at both Belfast and Birkenhead. To coincide with her introduction, Belfast Harbour and Peel Ports invested in upgrading the berthing facilities at Belfast VT2 and Birkenhead 12 Quays South to allow twin-level loading at both ports. As a result, STENA EDDA and STENA EMBLA will be able to load and unload within the same time as the existing ships, despite their far greater vehicle capacity.

The E-Flexer class was designed by Stena RoRo and Deltamarin for use by sister company Stena Line and for charter to other operators. It is the product of a collaboration between Stena RoRo, Stena Line, marine architect Deltamarin, Stena Teknik, interior architect Figura, and Weihai Shipyard in China. Designed to be more environmentally friendly and efficient than existing ferries, Stena’s E-Flexer design has also be designed to be flexible and is suitable for numerous routes from short day crossings to overnight services. Because of this flexibility, it is possible that STENA EDDA could cover for STENA ESTRID on the shorter Dublin – Holyhead route and vice-versa. STENA ESTRID and STENA EDDA are the first of nine vessels currently ordered based on the E-Flexer design.

STENA EDDA took 25 months to construct from the start of steel cutting until delivery. Like most modern vessels, she was assembled from blocks in a building dock and floated out rather than launched from a traditional slipway. From keel laying to float out took 10 months. Nine months of fitting out, commissioning, and trials followed before the vessel was delivered five days early on January 15 2020. Although construction took place in China, European suppliers played a key role in the project with items such as glazing and the main engines shipped from Europe. Because of the scale of the E-Flexer project, outfitter R&M built a dedicated climate-controlled cabin production facility on-site in cooperation with the shipyard. STENA EDDA made her maiden commercial voyage with the 21:30 departure from Birkenhead on March 9, 2020. As expected, she has replaced STENA LAGAN in the fleet.

Stena Line are using a new naming scheme with their E-Flexer vessels, choosing to use female Nordic names beginning with “E” with the usual Stena prefix. The names of the first three vessels were chosen via a staff competition.  According to Stena Line, Edda:

is an old Norse term that refers to a central medieval collection of poems and divine mythology.

The facilities on STENA EDDA are spread out over 4 decks as follows.  Public facilities are housed on Deck’s 7 and 8, the latter of which also house approximately half of the passenger cabins.  Deck 9 is a cabin and crew deck while Deck 10 is at the top of the ship and has a passenger accessible sun deck.  A total of 175 passenger cabins are provided including six deluxe cabins and disabled cabins. This is a significant increase in the number of cabins provided on STENA LAGAN and STENA MERSEY. Outside deck space is plentiful, with promenade decks on both sides of deck 7, a sun deck on deck 10, and outside decks aft on decks 8 and 9. The spaces on decks 8 and 9 also double up as balconies for the deluxe cabins.

For a detailed impression of how STENA EDDA looks inside, see our first look inside Stena Estrid feature. STENA EDDA is virtually identical to her sister with only minor cosmetic changes inside.

Note that while the suppliers used on Stena Edda and Stena Estrid remain largely consistent throughout the E-Flexer series, Brittany Ferries and DFDS have opted to use their own choice of suppliers on some aspects of their vessels.  For instance, DFDS’s CÔTE D’ OPALE will have an HVAC system supplied by Heinen and Hopman rather than Novenco.  Both companies also intend to appoint their own interior designers in addition to Figura. Figura’s services are included as part of each company’s build and charter contracts with Stena RoRo.